A search was underway Thursday after a cargo ship carrying nearly 6,000 cattle from New Zealand to China capsized during stormy weather.

So far, only one crew member of 43 has been rescued from the East China Sea, Reuters reported.

Gulf Livestock 1 sent a distress call off the west coast of Japan after the ship lost an engine and hit a wave amid seas tossed by Typhoon Maysak.

Sareno Edvarodo, 45, a rescued chief officer from the Philippines, said after they lost an engine the crew was told to put on life jackets. He said he jumped into the water and didn’t see anyone else before he was rescued Wednesday night.

Along with Edvarodo, there were 38 other Filipino crew members, two Australians and two New Zealanders.

NANA TO BECOME HURRICANE BEFORE LANDFALL IN BELIZE, TROPICAL STORM OMAR MOVES AWAY FROM US 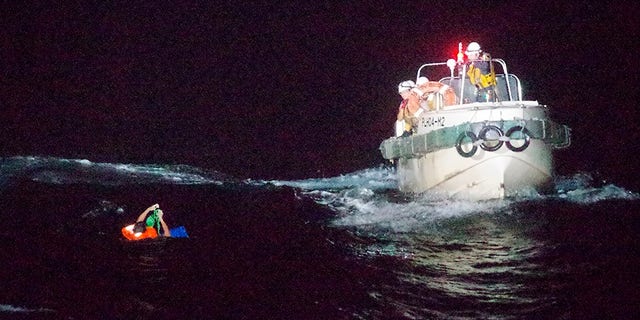 In this photo released by the 10th Regional Japan Coast Guard Headquarters, a Filipino crewmember of a Panamanian cargo ship is rescued by Japanese Coast Guard members in the waters off the Amami Oshima, Japan Wednesday, Sept. 2, 2020. Japanese rescuers have safely plucked the crewmember from the sea while searching for the cargo ship carrying more than 40 crew and thousands of cows went missing after sending a distress call off the southern Japanese island. (The 10th Regional Japan Coast Guard Headquarters via AP)

Typhoon Haishen is also strengthening off the coast of Japan and is expected to hit the Korean coastline in the next few days.

The 145-foot Panamanian ship carrying 5,867 cows was expected to reach Jingtang Port on China’s east coast in 17 days, according to Reuters.

The wreck has again raised questions about the ethics and safety of the country’s live animal trade.

“This is a real crisis, and our thoughts are with the families of the 43 crew who are missing with the ship. But questions remain, including why this trade is allowed to continue,” Marianne Macdonald of the animal rights group SAFE said, according to Reuters. “These cows should never have been at sea.”

The New Zealand government launched an investigation into the multi-million dollar business last year in the wake of thousands of animals who have died in transit.