The owner of the San Francisco salon Nancy Pelosi visited in violation of coronavirus restrictions blasted the House Speaker in an emotional online news conference Thursday, even as protesters gathered outside the Democrat’s mansion and hung hair dryers and curling irons from a tree.

Erica Kious fought back tears as she denied Pelosi’s claim the incident at E SalonSF was a setup, a charge the speaker leveled after the secret style session was first reported by Fox News Tuesday. Surveillance video images obtained by Fox News showed the 80-year-old Pelosi roaming the salon maskless in a bathrobe, even though salons had been unable to open to the public since March due to the pandemic.

“For the Speaker of the House to go on TV and falsely claim she was set up and publicly defame me, and sent out PR firms … in support of the Speaker’s own lies is bad enough,” Kious said. “But for Speaker Pelosi to frame herself as a victim under a totally false narrative while small businesses and workers all over California – the state she represents in Congress – suffer and struggle just to survive is beyond shameful.”

Kious, who says she received threats after the disclosure, was especially angered over Pelosi’s claim that it was she who was owed an apology for being “set up.”

“I don’t owe anyone an apology,” Kious said. “Mrs. Pelosi owes the entire country an apology. If America goes in front of Congress and lies, they go to jail. But apparently, when the most powerful woman in the world lies to America, we owe her an apology.”

Meanwhile, protesters were gathering outside Pelosi’s mansion in the posh Pacific Heights section, where they hung blowdryers and hair curlers from a tree.

The San Francisco Chronicle’s Jessica Christian, said the demonstrators described themselves as “angry salon customers who want to get their hair and nails done.”

One of several video clips Christian posted on Twitter shows the protesters forming a hand-holding circle near the tree they “decorated” with tools of the beauty trade and an American flag.

Kious told Fox News Wednesday that she rents chairs to stylists, and one of them informed her in advance that Pelosi wanted a wash and blow-dry. California guidelines on salons vary by county, but stringent San Francisco officials have not yet permitted indoor salons to open. As of Sept. 1, they were able to provide outdoor service.

Kious said she considered Pelosi getting her hair done “a slap in the face” to struggling business owners.

Pelosi has been defiant and refused to accept responsibility for getting the illicit VIP treatment.

“I take responsibility for trusting the word of a neighborhood salon that I’ve been to over the years many times, and that when they said … we’re able to accommodate people, one person at a time, and that we can set up that time, I trusted that,” Pelosi told reporters Wednesday. “As it turns out, it was a set-up.”

“I take responsibility for falling for a setup,” she said. 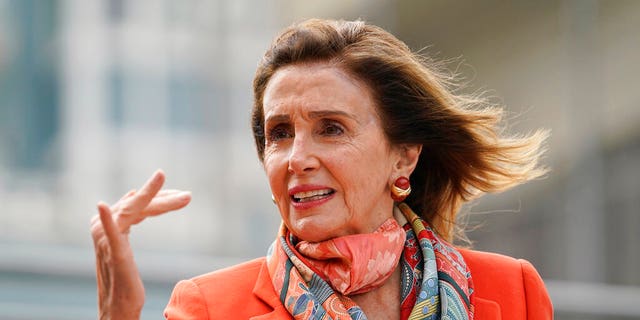 Pelosi said Wednesday she would not answer any more questions about the visit and asked at one point whether reporters had any questions “about the fact that people are dying,” referring to the HEROES Act legislation she called the news conference to address.

A reporter asked why she was not wearing a mask in the brief clip.

Matthew Soleimanpour, an attorney for Jonathan DeNardo, who did Pelosi’s hair, said his client received permission from the salon owner a day earlier to make the appointment.

“It appears Ms. Kious is furthering a setup of Speaker Pelosi for her own vain aspirations,” Soleimanpour said in a statement.

“If anyone set up Mrs. Pelosi, it could only have been the person she booked the appointment with, Jonathan DeNardo,” Kious said. “Obviously this makes no sense. I am confident that Jonathan did nothing to set up Mrs. Pelosi. In fact, nobody set up Mrs. Pelosi. She is attempting to scapegoat her stylist Jonathan – a big fan of hers – and me, a small business owner who has had no interactions with her about any of this.”

On Thursday White House Press Secretary Kayleigh McEnany played the salon footage of Pelosi as she said the House speaker “ought to apologize” to Americans.

“Nancy Pelosi was not in the halls of Congress when I asked where she was, she was not working in good faith to make a deal for the American people,” McEnany said during a White House briefing. “Nope, Nancy Pelosi was found in San Francisco, at a hair salon, where she was indoors, even though salons in California are only open for outdoor service.”

The Associated Press contributed to this report.