“What is certain is that there were three different fire outbreaks, I saw them myself,” Rolland said about the blaze at Cathedral of Saint Peter and Saint Paul, which has been contained. CNN has contacted the Nantes prosecutor’s office for more information.

Fire Chief Laurent Ferlay told a press briefing in front of the cathedral that the blaze was not as big as the one that engulfed
Notre Dame Cathedral in April 2019, and the damage is not as bad.

“I can confirm that we are not in the Notre Dame of Paris situation, rooftop is not affected,” Ferlay told CNN affiliate BFM on Saturday.

“The damage is concentrated on the organ, which seems to be completely destroyed. Its platform is very unstable and could collapse,” he said.

Ferlay added there are 104 firefighters at the scene, who will remain there “all day.”

Images and videos from the scene showed
orange flames and smoke billowing out of the front windows of the soaring Gothic structure.

French President Emmanuel Macron tweeted his “support” of the firefighters who contained the fire on Saturday.

“After Notre-Dame, the Saint-Pierre-et-Saint-Paul cathedral, in the heart of Nantes, is in flames. Support to our firefighters who take all risks to save this Gothic gem of the city of the Dukes,” Macron wrote.

French Prime Minister Jean Castex expressed “solidarity” to the people of Nantes in a tweet on Saturday morning. 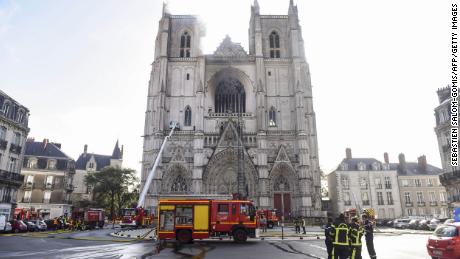 “Thinking of our firefighters courageously mobilized to contain the fire in Nantes cathedral. I assure them of my support and my deep gratitude,” he added.

Referring to a previous fire at the cathedral in 1972, Nantes Mayor Johanna Rolland said “it doesn’t seem to be comparable,” while also speaking to BFM.

Regional firefighters told the public in an earlier tweet to “stay away from the area… do not interfere with the rescue squad.”

Coronavirus live updates: Fauci was not at meeting where CDC guidelines were discussed; woman may have gotten COVID from plane bathroom – USA TODAY