Kanye West just tweeted something that seemed to cast shade in Taylor Swift‘s direction, but it also seems it might be directed at Kim.

Kanye, who’s ensconced at his Wyoming ranch, tweeted a pic of a rattlesnake with the caption, “Not gonna use a snake emoji cause you know why … I’m not sure if Christians are allowed to use snake emojis.”

Not gonna use a snake emoji cause you know why … I’m not sure if Christians are allowed to use snake emojis 🤔 pic.twitter.com/CUR6SSRNqP

You probably recall Ye’s war with Taylor Swift back in 2016, when Kanye said he gave Taylor a heads up before releasing his song, “Famous,” which included the lyric, “I made that bitch famous.”  Taylor begged to differ and the war was on.

Kim jumped to Kanye’s defense, using snake emojis to call Taylor a “snake” after Swift said she was blindsided by the lyric. 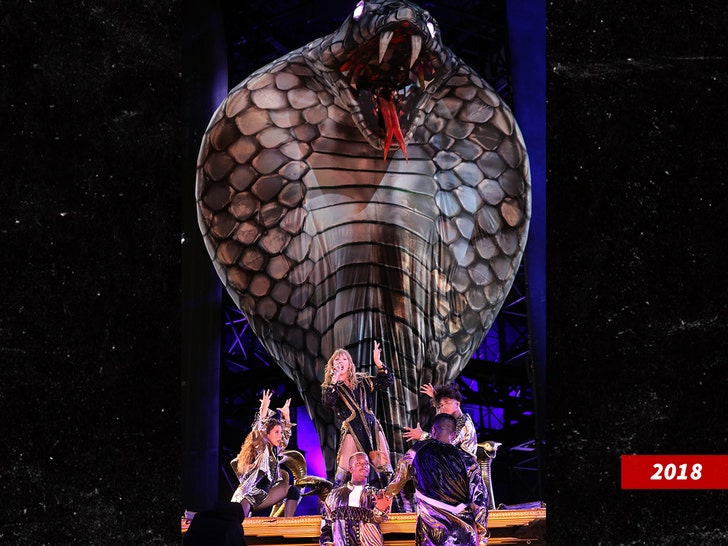 Taylor then used a giant, robotic snake during her “Reputation” tour.

So, Ye saying it’s not the Christian thing to do sure seems like shade. It’s unclear what got Kanye heated since the feud is 4 years old. That said, it’s interesting the only person who used snake emojis was Kim, not Taylor.

BTW … Kim and Kanye were on a trip to try and save their marriage, but they are now a thousand miles apart. He’s in Wyoming and she’s in L.A.