At least 63 evacuees have been rescued so far, officials said late Saturday night. The Creek Fire has injured a dozen people — two of them critically, according to the Fresno Fire Department, which is calling the situation a mass casualty incident.

The fire is burning in the Sierra National Forest, and has exploded in size since it started, said Dan Tune, spokesperson for the US Forest Service.

The fire ignited Friday evening in the forest south of Yosemite National Park and grew to 36,000 acres by Saturday. A helicopter with a public address system issued the warning to the group at the lake.

Mammoth Pool Reservoir is a popular recreation site, but Tune could not provide an estimate on how many people were told to shelter in place.

The Madera County Sheriff’s Office said in
a Facebook post that 150 people were trapped at the Mammoth Pool campground.

“Emergency crews from multiple agencies need to focus on the critical task at hand – rescue of the approximately 150 people sheltering-in-place at Mammoth Pool Boat Launch,” the post said. “We are in contact with those sheltering at Mammoth Pool Reservoir and while they have reported ten injuries, they are able to shelter safely at this time.”

Campgrounds throughout the area are under mandatory evacuation orders, but the route out has been compromised.

“Fire runs uphill as does the road out. We did not want to put campers attempting to caravan through an area where fire is likely,” Tune said. 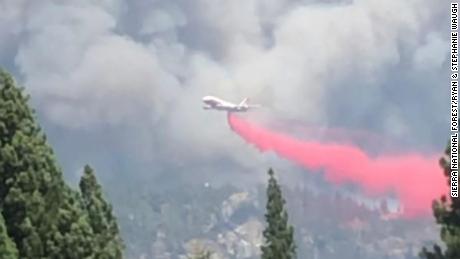 The wildfire is burning aggressively and temperatures in the area are approaching 100 degrees, Tune said.

“This is in a river canyon, so in the afternoon you get up canyon winds,” Tune noted, adding that sustained wind speeds are about 10-15 miles per hour.

Roughly 450 firefighters are battling the blaze along with three helicopters and three air tankers,
according to the Forest Service.

There have been a couple instances of limited visibility due to the smoke, but planes and helicopters have continued to fight the fire from the air, Tune said.

“The column on a fire like this can be quite dangerous, so the aircraft has had to back off for a time, and go back again once conditions change,” he said.