Those restrictions include a curfew in Melbourne for the next six weeks, a ban on wedding gatherings, and schools must go back to online classes. Only one person per household is allowed to leave their homes once a day — outside of curfew hours — to pick up essential goods, and they must stay within a 5 kilometer (3.1 miles) radius of their home.

On Monday, further businesses restrictions were announced, including the shuttering of non-essential industries.

The state of Victoria, of which Melbourne is the largest city, recorded 429 Covid-19 infections on Sunday, down from 671 cases the day before, according to Victoria’s Chief Health Officer Professor Brett Sutton. Thirteen new deaths were also announced, bringing the state’s total to 136, and there have been a total of 11,937 confirmed infections.

Sunday’s announcement underscores how quickly early success in containing the virus can unravel.

In May, Australia was
held up as a global model for its handling of the outbreak, which started with early measures to bar entry from high-risk countries. Stricter curbs on social gatherings, expanded testing, restaurant and bar closures, followed as cases rose, with some states sealing their borders.

But Covid-19 cases in Victoria have risen suddenly in recent weeks, with many new infections in aged care homes and among healthcare workers. Eight of the 13 new deaths on Sunday are linked to known outbreaks in aged care facilities.

“This six week period is absolutely critical,” said Victoria state Premier Daniel Andrews in a daily press briefing on Monday. “This is a very tough day and there will be many more of those until we get to the end of this.” 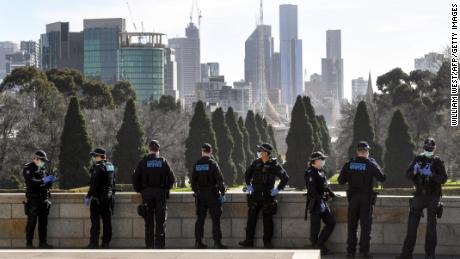 From 11:59 p.m. local time on Wednesday, some businesses such as retail, some manufacturing, and some administration will close. Industries scaling back include construction and meat works, which Andrews said was a “significant challenge for us.”

Warehousing, distribution centers and meat processing plants will cut operations by one third, and will impose some of the “most stringent safety protocols that have ever been put in place in an industrial setting.” Workers will be “dressed as if they were a health worker,” Andrews said, with masks and gowns, shields, temperature checks and testing.

About 250,000 people are already out of work because of virus in the state of Victoria, and the new industry restrictions mean that number will likely double, Andrews said. About 500,000 people are currently working from home.

“The entire impact of this pandemic, which is now months old, will take us years to recover from. There’s no doubt about that,” he said.

The tough measures will be “very difficult but it’s what is necessary” to drive down coronavirus numbers, he said, “so at end of six weeks we have every chance of getting this back under control.”

“It’s hard to imagine what a stage five might look like. But it would radically change the way people live. Not just rules on when and where you can go shopping — but restrictions on going shopping at all,” Andrews said, referring to the most severe measures that could potentially be implemented into the future.

Melbourne residents had already been
under strict measures for most of July after the area was identified as the epicenter of Australia’s second wave.

Ben Fessey, 30, an agricultural commodity broker living in Melbourne said there was a “heavy mood on the streets” before the new restrictions went into place on Sunday.

“It feels like its just been ongoing,” he said, adding that the different measures were “blurring together.” 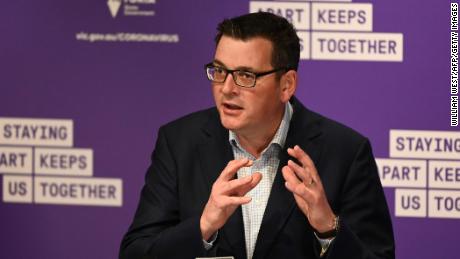 Fessey said there is some frustration but “no sense that there are marches or protests from what I’ve seen. Everyone still pretty on board for the greater good.”

Outside of Metropolitan Melbourne, regional Victoria will be placed under stage three restrictions starting at midnight on Wednesday, meaning cafes, bars and restaurants must be closed. All schools in Victoria will also move back to online learning.

Patrolling police officers have been a frequent sight in Melbourne, as authorities seek to enforce rules on leaving home and on the mandatory wearing of face masks.

How did it get so bad?

The spike in cases and month-long restrictions has made Melbourne an outlier from the rest of the country.

Andrews said on Sunday, the state has 760 “mystery cases,” where “we cannot trace back the source of that person’s infection.”

“Those mysteries and that community transmission is in many respects our biggest challenge and the reason why we need to move to a different set of rules,” Andrews said.

Professor Sharon Lewin, Director of the Peter Doherty Institute for Infection and Immunity said the increases in numbers seen in Victoria were not happening over the rest of Australia.

Last month, Australian officials launched a judicial inquiry amid allegations the fresh coronavirus outbreak in Victoria was
sparked by some contracted workers not following protocols at a hotel used to quarantine international arrivals — including reportedly having sex with people under lockdown.

“We’ve also had outbreaks in some industries which is quite common around the world. We are also seeing outbreaks in housing projects so we are seeing different communities effected which is a lot more challenging now. Community transmission, people in high-density living, so the problem is bigger,” said Lewin.

On Friday, Andrews said that over 130 people — one in four of those who’ve tested positive — were caught defying stay-at-home orders. Doorknocking teams dispatched to check on infected individuals were increased to 34 teams of three, he said.

“Both public health experts from the Victorian team and those on a national level will spend the next day or two looking at the data at the six-week point, the halfway point of the stay-at-home orders that we put in place,” said Andrews, in a daily health press briefing.

On Sunday, Victoria’s leader of the opposition Michael O’Brien blamed the government’s “failings” in “hotel quarantine, in testing and in contact tracing have led to millions of Victorians being subjected to the harshest restrictions in our history.”